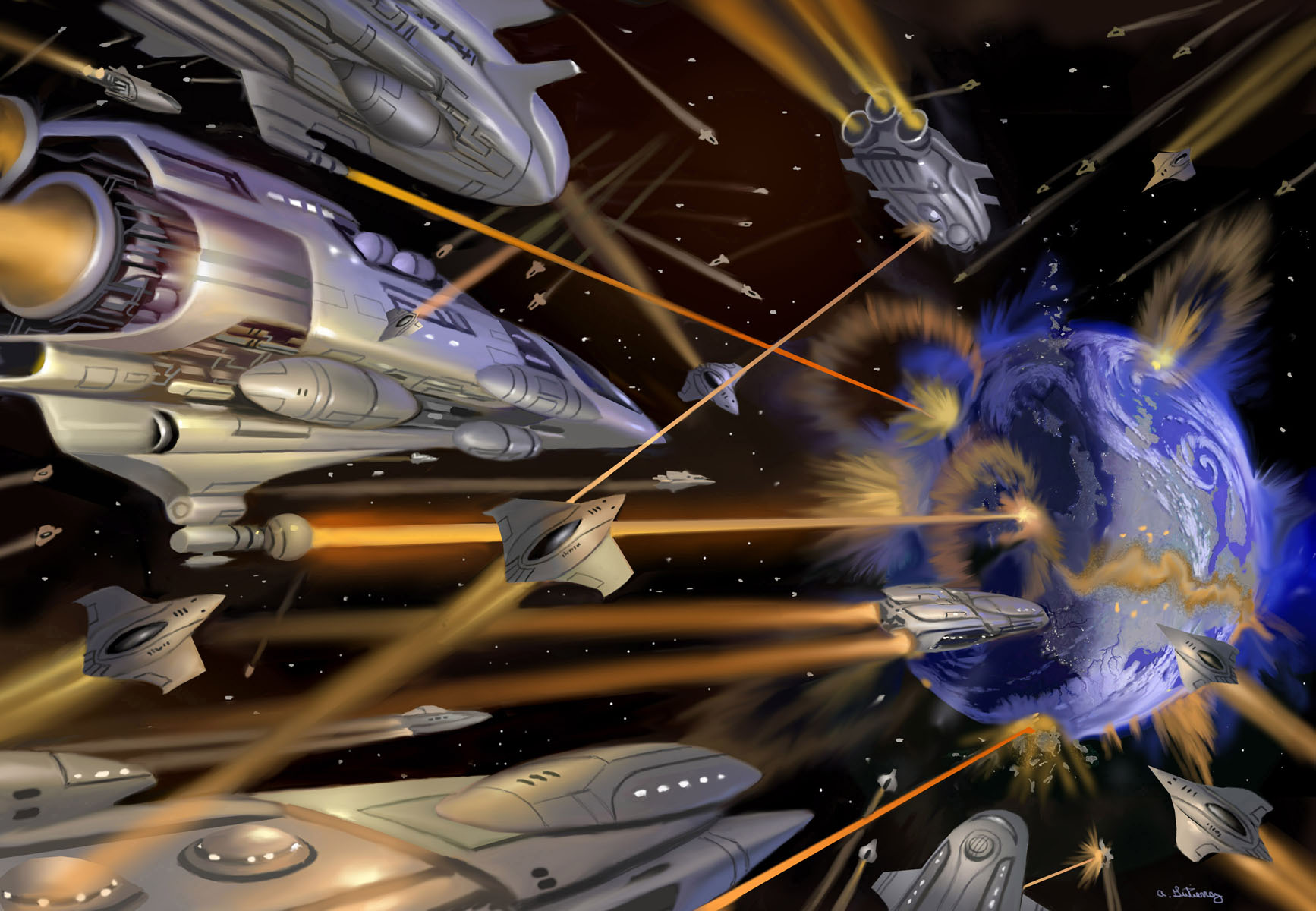 The Church of New Universal Harmony

The era of exploration following the development of the Alderson Drive, which allowed for interstellar travel, was predictably followed by a wave of colonization. The initial colonists tended to be both wealthy and discontented with Earth's civilization. Many were motivated by religion: both the more traditional religions, and the secular religion that grew out of what was known in the Twentieth Century as "The Ecology Movement," or "The Greens."

Life on most of the CoDominium colony worlds was primitive at best. Horses and mules were common for transportation; they could be carried as frozen embryos. They dont require high-technology industry to produce them, nor fuel them. Imports from Earth are rare as most of the wealth leaves the colonies, in the form of minerals, gems, drugs, artworks, for Earthnot the other way around. Precious elements worth interstellar mining are: manganese, cadmium, platinum, molybdenum, tellurium, tungsten, gold and silver. Only a few of the richer colonies, like Friedland and Meiji, have any important home grown heavy or high tech industry.

In the first generation after the perfection of the Alderson Drive in 2010 more than forty planetary colonies were founded, not counting closed-environment mining settlements and refueling stops in systems without Terresteroid planets. While the CoDominium did not encourage governments (other than the US or Soviet Union) to establish direct settlements, corporations or settlement associations clandestinely backed by governments were common. Private colonization ventures were typically either commercial e.g. Hadley, religious e.g. Ararat or Haven or ethnic in nature; see Dayan, Friedland, Meiji, others. During this phase, several million emigrants left the solar system, almost all voluntaryalthough both the CoDominium Powers offered increasingly strong "encouragement" to politically inconvenient individuals and groups. Thus there are now planets whose population is purely Mormon (Deseret), American Black Separatist (New Azania), Russian nationalist (St. Ekaterina), Finnish (Sisu), and even Eskimo/Innuit (Nuliajuk).

Many of the early colonists were quite sophisticated, and had good reason to expect success in establishing their cultures on new planets. Unfortunately, they did not reckon with the intense pressures on the governments of Earth.

The second phase of interstellar colonization began with the extension of the Bureau of Relocation's mandate to include involuntary transport of colonists (in addition to the already existing flow of convicts, many merely petty criminals). Social decay and corruption forced the CoDominium's Bureau of Relocation and the Bureau of Corrections to forcibly transport people from Earth to outworld colonies. Bureau of Relocation ships were the pits; even worse than Navy transports converted for hauling convicts. This mass expulsion is made possible by the Alderson Drive, a device that allows instantaneous travel across distances of light-years. The star lanes are patrolled by the CoDominium Armed Forces, an elite fighting force whose true allegiance is not to the CD but to the Fleet.

During the period 2040 to 2050 voluntary emigration has remained roughly stable, but involuntary emigration has increased to levels exceeding fifteen million persons per year; at the same time, more than seventy new planetary colonies have been founded, many specifically by the Colonial Bureau as relocation settlements. Given the sometimes extremely marginal habitability of the planets concerned (see Haven, Frystaat) and the endemic shortage of capital in the outsystem colonies, casualties among the transportees are often heavy, with life expectancies averaging as little as three years in some cases.

Haven is the official name given to the second moon of the fourth planet in Byers System. It is unusual in every way. Byers IV - generally known as the Cat's Eye - is located far outside the normal habitable zone for a G2 star; but being approximately 1.3 Jupiter masses, the gas giant provides sufficient radiant energy to keep much of Haven marginally tolerable.

Haven's rotation is unusual, since it is locked tidally with the Cat's Eye, but in the synchronized pattern of Mercury rather than always presenting the same face as does Earth's Moon. The planet is somewhat smaller than Earth, and has a much thinner atmosphere. Due to its proximity to the Cat's Eye there is great seismic activity. During the period of formation the tidal forces resulted in unusual patterns of vulcanism. Haven is a jumble of high mountains and deep rift valleys. Most of the mountains are high rocky peaks similar to the Andes mountains in South America on Earth.

The only temperate area is in the equatorial zone, which climactically resembles northern Scotland. Due to the thin atmosphere the only nearly comfortable area of Haven is a single deep rift valley in the equatorial area. The valley is locally called Shangri-La after a similar place in a novel of the 20th Century.

Like all life discovered so far, the indigenous plants and animals of Haven have biochemistries similar to those of Earth, but evolution has produced some unusual proteins. Needless to say, life native to Haven is extremely hardy, and proved quite dangerous to the early settlers, as indicated by names such as "shark's fin," "hangman bush," "land gator," "dragon" and "wireweed". Efforts to reseed Haven with Earth plants and animals have been only partly successful.


The Church of New Universal Harmony

The following Historical Overview of The Church of New Universal Harmony is taken from a paper presented by the historian E.R Stewart and sheds some interesting light on the church who were the original human inhabitants of Haven.


Circa 2000 - Garner "Bill" Castell was a wandering scholar, some said con-man, adventurer, drifter, or opportunist, whose personal magnetism attracted a following of young people when he was arrested for vagrancy in Austin TX, and managed, by a series of highly publicized stunts and statements, to successfully defend himself.

He was supported by local young people, whose ranks quickly swelled as word of his thinking spread. He soon had the money to buy land and found Harmony University. He married, had at least one child, and for the next couple of decades built up his media campus into the Church of New Universal Harmony, a considerable power in the Southwest region of the old United States of America.

In 2032, Byers System was discovered., in 2036 Haven was declared habitable, and in 2037 Garner "Bill" Castell bought the license to colonize Haven. He died that year confronting church members who charged him with having looted church coffers to finance a pie-in-the-sky promised land only a chosen few might see. His 29 year-old son, Charles, who had been functioning as the church's second-in-command, assumed leadership of the New Harmony expedition, thence called The Chosen, to Haven.

A first-hand account of the establishment of the colony was documented by Kev Malcolm, a young acolyte who accompanied Reverend Castell, and who later became first Deacon of the transplanted church, in a personal testament.

In 2048, when Hafnium was discovered there, after the North American Miner's Revolt on Earth, and after several questionable events had prompted senatorial ire and CoDominium interest, Haven was placed under CD authority. The Harmonies protested, but the CoDo prevailed. The CoDominium's irresistible force met and conquered Charles Castell's would-be immovable object.

After Charles Castell's demise, the Harmonies looked to their Writings for guidance, incorporating several personal testaments of the "In Concert" ilk. Strictness, which had increased in the final years of Charles Castell's dominion over the church as he struggled to maintain control and coherence against mounting odds, was abandoned by most remaining Harmonies, although some actually worsened it upon themselves Mass migration was considered, but the church had neither funds nor places left to go. Villages and towns sprung up, many vanishing in a season, others taking root and growing into important trading or cultural centers.

Because the Writings were now open to unguided interpretation, each reader could form personal opinions, and the church quickly disintegrated into a myriad of sects. Almost any course of action could be 'justified' by this or that passage of the Writings, and groups of people took full advantage of this inherent flaw of language. Many of these small groups scattered over Haven's habitable areas, but some simply became 'invisible' and went among the infidels incognito.

Some sects went underground, waging a kind of guerilla war for survival in a doubly hostile environment. Cloisters, such as that maintained at Efrata, Pennsylvania, arose, while others became hermits or built walled monasteries. Some Harmony sects even merged in various ways with other belief systems, which ranged from Mammon to Mysticism, and so managed to survive by adapting or by being absorbed. When no one filled Charles Castell's shoes, the Writings remained at the core but interpretations began to vary as daily life impinged upon questions of doctrine that each group or individual had to decide upon in relative isolation and without a leader.

Haven remained the place where most self-professed Harmonies could be found, despite the onslaught of infidel newcomers, although Castell City itself seemed drained of Harmonies. Followers of the Harmony faith dispersed by becoming miners, ships' crews, and even military members. There seemed as many forms of Harmony as there were Harmonies. The church faded from public view, maintaining Writings and general principles of peacefulness, if not strict pacifism, similar to the Quakers, or Society of Friends, but without dogma.

As such, the church was akin to Shintoism, which has no dogma, no theology, no ideology, and yet thrives upon the ineffable and inexpressible. Also, like Zen Buddhism, the church rapidly shed concrete explanations or interpretations, preferring the non-verbal form of communication for which Harmonies became justly famous, and for which Harmonies were best remembered, musical composition, even as Shakers were mainly recalled for their elegant and simple furniture and designs in early Earth history.

Thus the Church of New Universal Harmony, sometimes called the New Church of Universal Harmony, (distinctions have been blurred by time and diverse usages), evolved from cult status, through full established church, and into the dispersal of sects within about a millennium. This paralleled the fragmentation of the Catholic Church sparked by the translation of the Christian Bible from Latin into vernacular tongues, first done by the Lutherans, which provoked the formation of so many other Protestant denominations as a succession of interpretations gained popularity with this or that group. Such evolutions may spring from the human beings and not from the church structures, doctrines, or underlying verities.

The Church of New Universal Harmony was a creature of its times. When it ceased to be a centrally administered church, it fell open to anyone's label. Many stories were told of this or that variant, this or the other exploitation of the church. No all-inclusive history was available to anyone, however, and no account was sanctioned or "official," so our understanding must remain incomplete. This may not be a bad thing, for either the Church of New Universal Harmony or for us, the readers and writers of histories, for thus is the meat of our life spiced with variety, even when considering realities.